...To the edge of the earth

Sometimes you just feel like reminiscing, looking at old pictures, and thinking about the memories connected with them!

Will it contain the colors of our dreams?

I finished my portrait of snow girl last week, I'm happy with how it turned out! I think that it captures the magic she is feeling on a more personal level.
I have a new art homework assignment, it'll probably be the only one this semester what with all the art we have to make to submit for the AP exam. The description is to create a self portrait without using any sort of face, it sounds like fun! Since a self portrait is a face, I figured that I would look at it as being a portrait of who I am. Something that connects all the things I love is challenge: challenging myself and the inspiration I get from it. So, after some though, I decided to do something more abstract. I decided to represent challenge by a drop of sweat (since a lot of my challenges are physical), and that drop starts a colorful swirl that starts thin with just a few colors, and gains thickness and more colors as the inspiration grows, eventually blending together. My "marvelous destiny" piece below was a source of inspiration for this idea, I will have swirling colors like this, only they will follow a curve like a spiral.

"There are three things all wise men fear; the sea in storm, a night with no moon, and the anger of a gentle man."
I just finished reading The Wise Man's Fear by Patrick Rothfuss, the sequel to The Name of the Wind. It's tough knowing that it's going be years before the third book in the trilogy comes out. I have to say, these are two of the best books I have ever read, and I'm a huge reader. It's a fantasy novel, but whether not you are a fan of the genre, I highly recommend reading these, the story is incredible, as are the characters, especially the main character, Kvothe.
1st PASSAGE:
Then I played a song that hides in the center of me. That wordless music that moves through the secret places in my heart. I played it carefully, strumming it slow and low into the dark stillness of the night. I would like to say it is a happy song, that it is sweet and bright, but it is not.
And, eventually, I stopped. The tips of my fingers burned and ached. It had been a month since I had played for any length of time, and they had lost their calluses.
Looking up, I saw Vashet had pulled my shaed aside and was watching me. The moon hung behind her, and I could not see the expression on her face.
"This is why I do not have knives instead of hands, Vashet," I said quietly. "This is what I am."


2nd PASSAGE:
And there it was. Like the name of an old friend that had simply slipped my mind for a moment. I looked out among the branches and I saw the wind. I spoke the long name of it gently, and the wind grew gentle. I breathed it out as a whisper, and for the first time since I had come to Haert the wind was quiet and utterly still.
3rd PASSAGE:
The Waystone Inn was his, just as the third silence was his. This was appropriate, as it was the greatest silence of the three, wrapping the others inside itself. It was deep and wide as autumn's ending. It was heavy as a great river-smooth stone. It was the patient, cut-flower sound of a man who is waiting to die.

Track & Field 2011 has officially started, I'm sore already and looking forward to the season ahead!
This is my 3rd consecutive year skiing at Sunday River in Maine, and previously I was used to the majority of the runs beings very icy and scrapy. Our first of 3 days this year, it was raining, and we had the mountain just about to ourselves! We got soaked, visibility was tough, and the few inches of new snowfall hardened by rain made conditions tricky, but it was wicked fun! The next two days were somewhat overcast, but we got some great snow!
For my next art piece, I want to evolve from just painting glaciers, to painting them in a way that shows how majestic and magical they can seem, so I'm thinking about doing one based on our crevasse jumps!

Waiting for the end

I'm pretty sad that all our snow is being melted by sudden warm weather and rain... I'd prefer it slowly melted, and that I could continue skiing! I'm going to Sunday River to ski all weekend, it'll be one of my last times downhill skiing this winter! But I am excited for track season and practicing the hurdles again, and I am getting slowly closer to graduating!

I have so much to do for AP Art and AP Calc that I'm not able to post as often as I'd like! But, here are a few new things
Posted by Jill at 4:46 PM No comments:

Skiing at Snowbasin, in Utah, was definitely one the of best experiences of my life. I had never skied powder before, but by the end of the first day, I was in love with it. I got three days of the best skiing of my life, and I can't wait to ski out west again someday!
I love the Ski Utah yeti, I got a shirt with him, and a sticker of him to put on my portfolio! He's an awesome design!

I'm in advanced visual communications this semester and I've created a few videos with Windows Moviemaker.
One was a story, in which I used Blink 182's "Aliens Exist" and some of my sisters little characters (including Tim Burton's Stainboy as the main character)!
The other was a typography for an advertisement. I chose to promote Jordan Romero (13, and aiming to climb the 7 summits, with only 1 left) and his campaign to raise money for the expedition to Mt. Vinson in Antarctica! 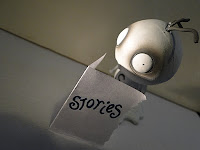 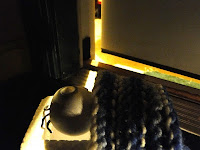 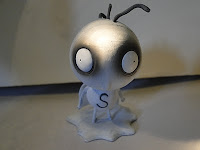 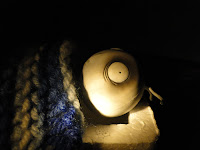 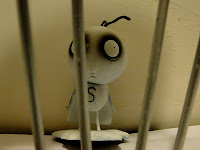