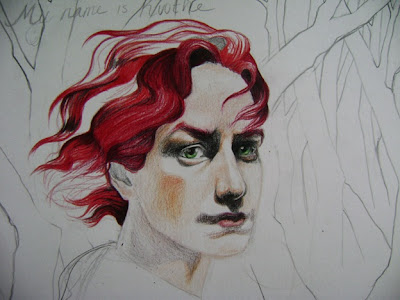 For quite a while I've wanted to create a drawing of Kvothe from Patrick Rothfuss' Kingkiller Chronicles. I want to use this summer as an opportunity to simply create what ever I feel like for fun. Not for class, and with no time restraints. I put a lot of thought into how I wanted to try to portray Kvothe: a portrait, a scene? I decided to use his entrance line "my name is Kvothe... you may have heard of me". He summarizes various myths and legends about himself in the "...". I decided to create a piece that was a portrait, but also had a scene. I thought about choosing a scene from the book, but decided against it. Instead, he is walking into a dark forest, looking back at you, while the blue flame of the Chandrian shines between the trees. I'm using colored pencil, and so far I have been working on his head, and outlining the lettering. 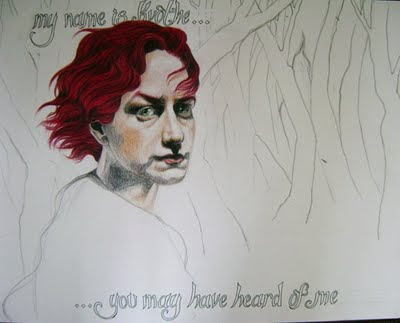 Some other interpretations of Kvothe...

Labels: artwork, books, kvothe, my name is kvothe, patrick rothfuss, the kingkiller chronicle, the name of the wind, the wise man's fear

There is another shore, you know

"What matters it how far we go?"
His scaly friend replied,
"There is another shore, you know,
Upon the other side.
The further off from England
The nearer is to France -
Then turn not pale, beloved snail,
But come and join the dance."


My sister and I finally graduated from West Boylston High on June 3rd, it's great to finally be done! I have my orientation at the University of Maine soon: June 19-20. After that I will be away for the majority of the summer, first staying on Long Lake in Maine, then Lake Michigan, and finally heading out for my third season on the glaciers in the North Cascades. I'll have just about a week to pack and head off for college when I return!
Tomorrow at 9 am, I am running in my town's 5k around the Wachusett Reservoir!
I was amazed that both my sister and I received the Elton & Kathleen Drew Scholarship for Continued Study in the Arts ($5000!) and I also received the Mass. Foreign Language Association Board of Directors Award, which I believe will be $500.
Yesterday I went on my final art trip with the NAHS. This year we went to Boston and visited the MFA, Faneuil Hall, and saw the Blue Man Group. We saw actress Rachel McAdams at the MFA which I thought was pretty cool! 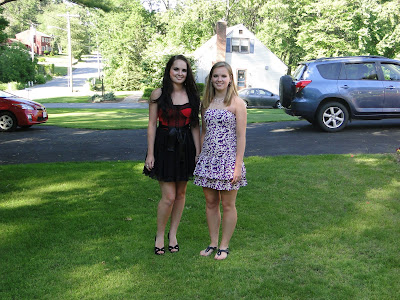 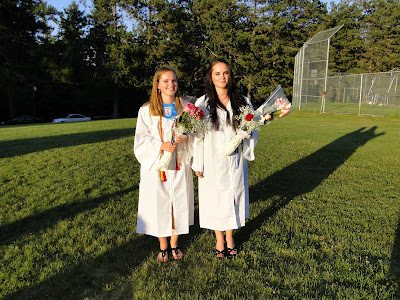 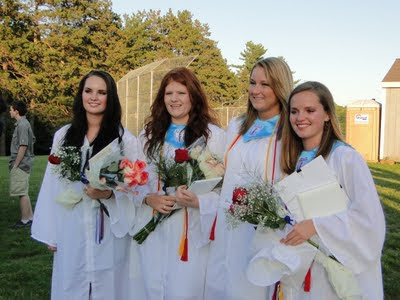 I ran in the Mt. Wachusett race last Saturday on the 28th. Last year I was participating in Art All State and I wasn't able to run it, so it wasn't until just before the race I found out that the course was different now. The old course was entirely on the road, 4.3 miles up to the summit. It was a tough race, all uphill - some especially tough climbs - and on pavement. I've always been a trail runner, and I certainly wouldn't call it a fun race, it was about the challenge. Now, the route covers 4.7 miles and the majority of it is on trails. Some areas were tricky because the trails were narrow, and it was hard to pass/ be passed. The steep uphill section about halfway through was the worst. It's very narrow with a lot of rocks and roots, the type of trail I often run on, but a lot of people decided it wasn't worth putting in the effort. I got stuck behind a large group of walkers, and I barely had the breath or strength to pass them. I managed to pass at least 20 people on that section. Many of them were obviously better runners than me - but they didn't even try to keep running, which confuses me. Sure, it's really tough, but it's a race, and you have to endure it and do your best to keep running!