Capturing beauty on the glaciers 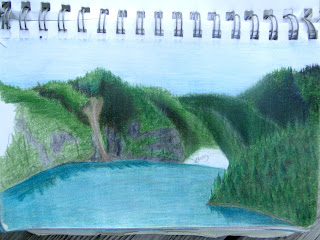 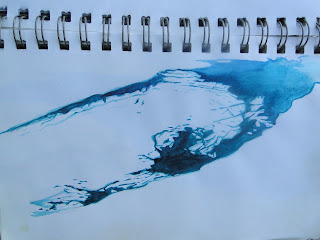 Tomorrow I leave for my 4th field season with the North Cascade Glacier Climate Project! This year I will be doing some of my own measurements - of crevasses! - as a research project for credit at UMaine. I put an image of my project hypothesis below. Also, I can't wait to use my little field sketchbook again - I am bringing up both watercolors and colored pencils and will alternate packing one or the other in at different glaciers. I look forward to posting pictures and sketches when I return on August 17th : > 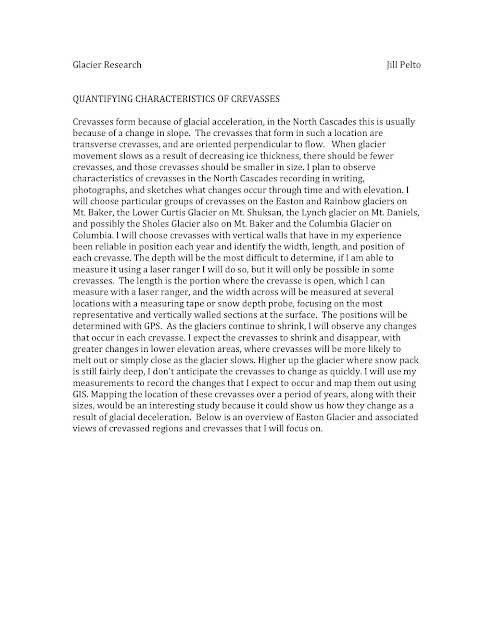 Sometimes people have a strong preference for Marvel or DC, but I honestly love characters and stories from both. When I was home at the beginning of the summer I created these three superheroes by pairing a character from DC with one from Marvel. I chose them based on the people I did them for. Above is a Storm - Batman combo I drew for my sister, and I also did a Spiderman - Ice girl for myself, and a Green Lantern - Wolverine combination for Jackson. I'm sure it is a blast coming up with your own superheroes as well!


Megan brought home mini- canvases (about 2 by 3 inches) and these are 2 of the 5 that I painted.

What matters it how far we go? 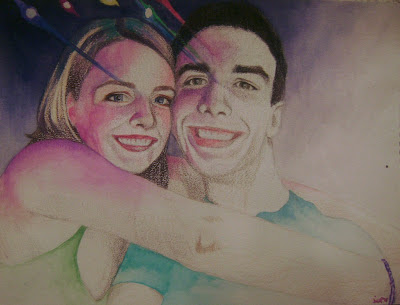 My other art gift to Jackson for his 20th birthday this summer was a water color/ colored pencil drawing of the two of us. I used a picture we had taken at school for reference, and I didn't go for exactness in our features or in shading, I kept it more light. The glowy colors at the top and across our faces are Christmas lights I had strung up in my room :-) 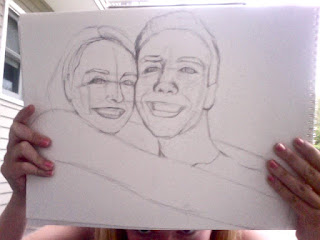 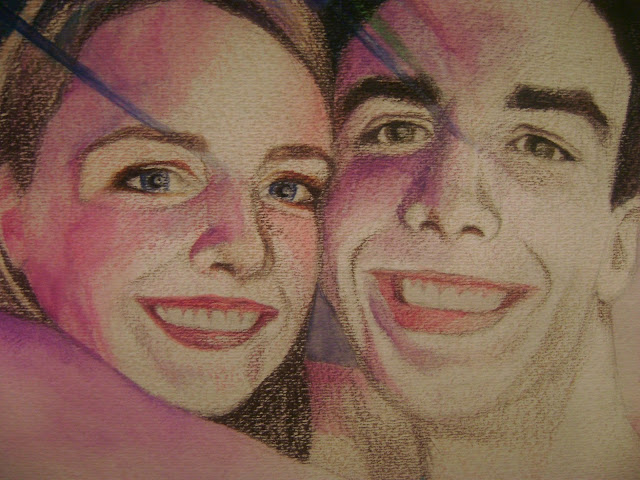 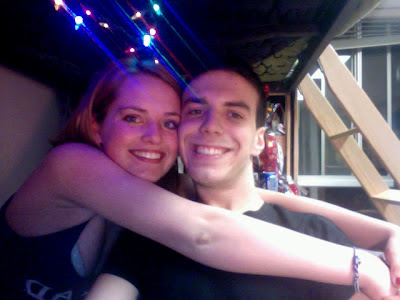 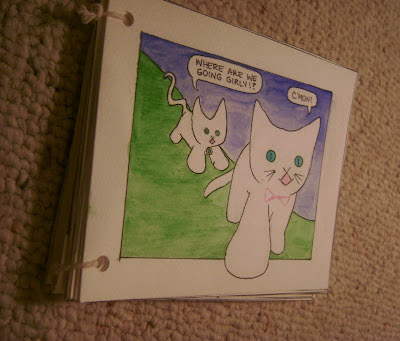 For Jackson's 20th birthday on June 20th I stayed at his house for the week. I sat down to make his birthday card beforehand, and it ended up becoming a whole comic book. My roommate, Robyn, makes really cute sock cats, and she made one for both me and Jackson during the school year! I decided to do a little comic-card using the two cats as the characters :-)
I used water color paper and water color paints to fill in the comic I had drawn and inked. I then lined up holes to hole-punch and tied them with some string to make the book!! It was super fun to do, and Jackson loved it! The book is around 5 by 6 inches I believe. 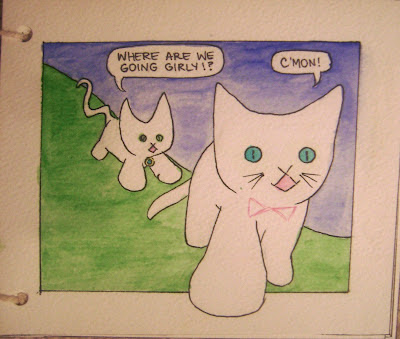 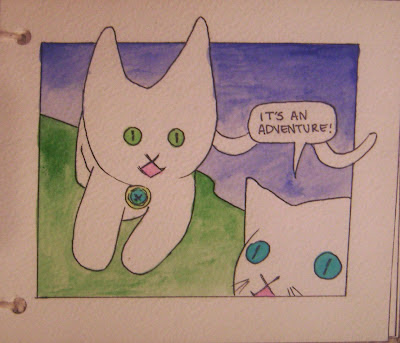 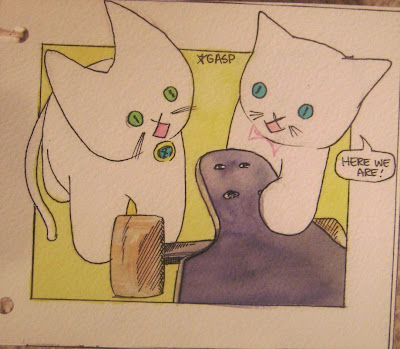 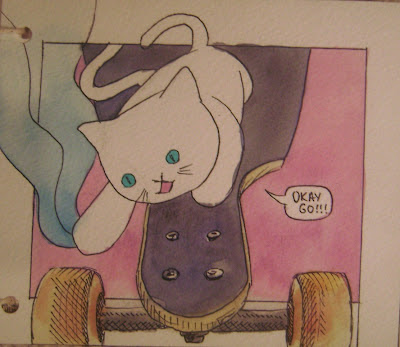 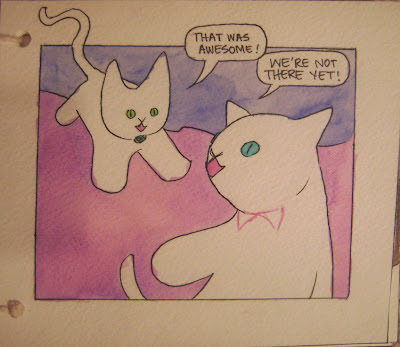 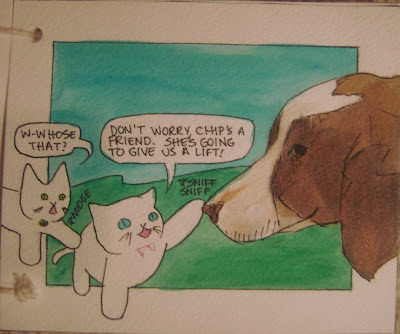 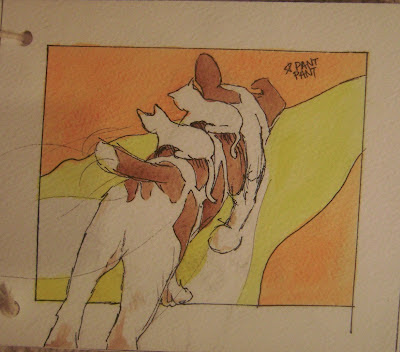 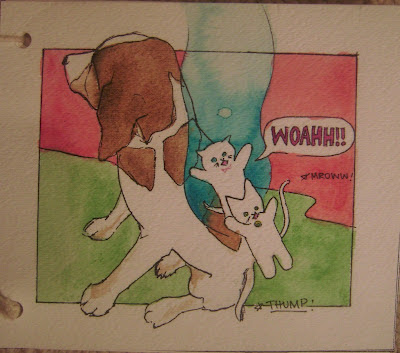 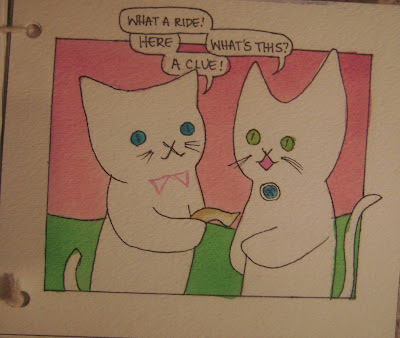 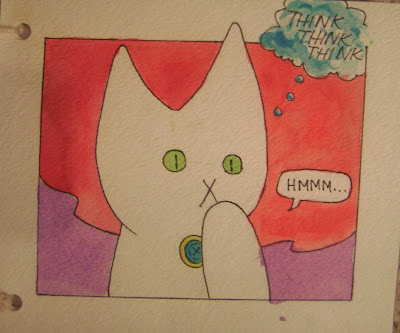 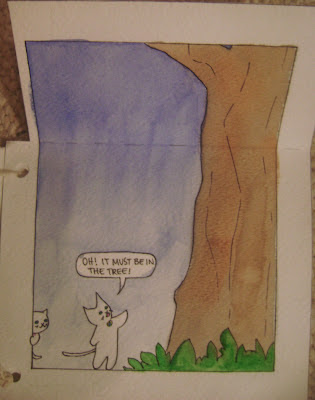 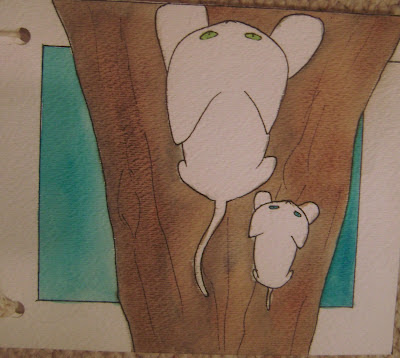 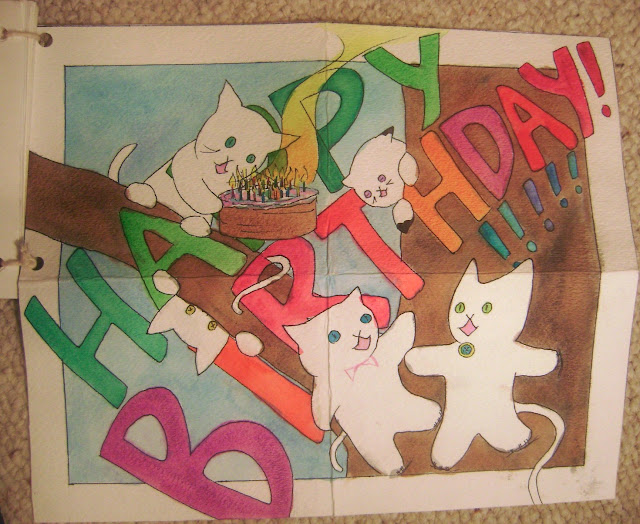 I made this as a thank-you card for letting me stay the week! We went paddle boarding at my family's place on Long Lake in Maine, and we went camping when I stayed at Jackson's, at a little island in front of his house on Webber Pond. 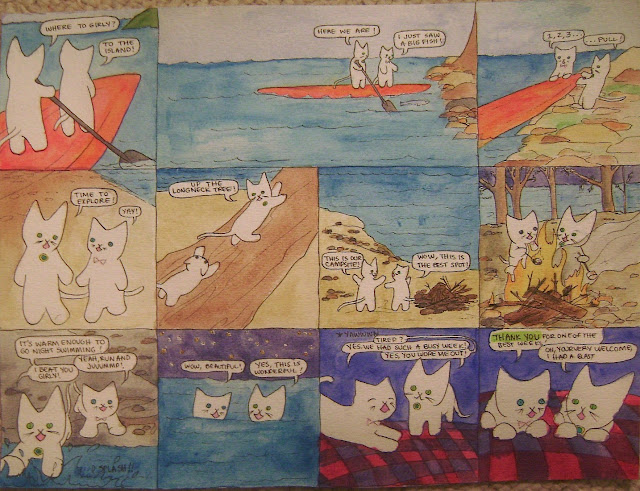 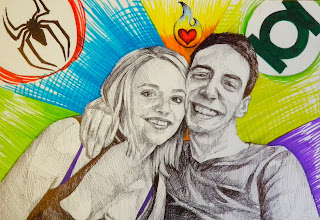 Towards the end of spring semester, I decided I wanted to do something cool for Jackson before summer began and we saw each other much less. Of course a drawing or some sort of art-creation idea came to mind, but I also wanted to do something more unique and fun. So, in order to make it a gift but also something interactive, I made him a puzzle scavenger hunt! I used some extra foam core I had from mounting artwork and drew a picture of us in pen. I used my Blick markers to make the background vibrant - with a Spiderman symbol for me and Green Lantern for Jackson.
I outlined 30 puzzle pieces on the back of the drawing and cut them out carefully with my x-acto knife. Before I cut them I tested out what shape tabs would be easiest to cut: typical round, square, or triangular, and square tabs worked the best.

I planned out the scavenger hunt in our dorm and all around campus, I took my a journal and rode around campus on my longboard, jotting down clues and deciding on hiding spots - one for each of the 30 pieces!
It took quite a bit of time, but I had a lot of fun doing it, and in the final week of school, I set it up! I was worried that people who find them/ weather would ruin them, so I didn't want to hide them until the day of, so I wrapped each puzzle piece in a clue and hid them all in the morning. Jackson was excited, he knew it was a scavenger hunt, but not what for, nor how extensive it would be! It was so much fun to finally do it and watch him get really confused over some of the clues. 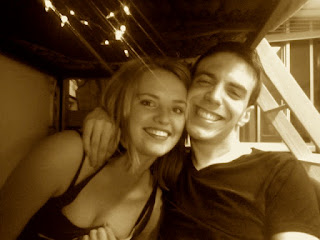 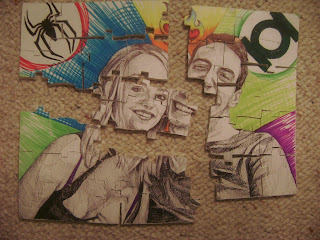 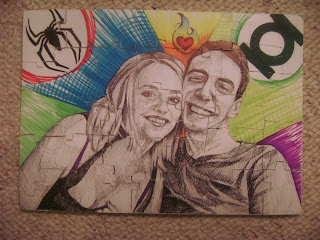 I have been doing a lot of art this summer, I just haven't been keeping up with photographing and posting it! I have various things that I will post early next week, before I leave for my 4th consecutive season with the North Cascade Glacier Climate project out in Washington for 17 days!
This summer has been great, I visited my family in Macatawa, Michigan, and in Maine