I had plans to go and watch The Joy Formidable perform in Boston today at the House of Blues however since all of Boston is currently on lockdown, and the show is postponed until June 20, I am just at Jackson's house for the day (we were going to take train into Boston from Portland). So I have the free time to post finally!

I have been taking printmaking this semester, it's a very time consuming class, but I really enjoy the challenges (..most of the time).

After working on etching copper plates, we have been doing relief printing with linoleum. Next up.. screen printing! Hopefully it will be a bit of fresh air from all of the work of etching and then carving.

For the Honors College course I am taking we had a project/paper due recently. I chose one of the texts we read this summer, Rachel Carson's Silent Spring, to do an artwork and short writing piece on. I loved this book, the powerful way it is written, and the message it presents. I chose printmaking as the medium because of the chemicals that are often used in certain processes. 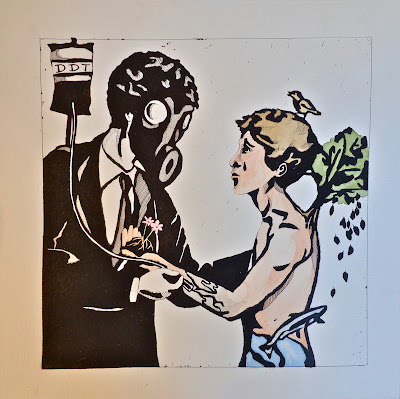 This is the portion of my paper that described the meaning of my artwork.. it is lengthy but I wanted to explain this thoroughly!
My artwork is inspired by Rachel Carson’s revolutionizing stance on the deception of the chemical companies. This piece is meant to be illustrative: capturing events that occurred and their consequences in a manner that those who do not understand the harm of pesticides may not have considered. A man in a suit whose face is concealed by a gas mask is confronting a young boy. The man is meant to represent an employee of the chemical industry who sells products such as DDT. His hidden face alienates the boy by hiding the identity of the man who seems to be playing the role of doctor. The suit indicates that he is not as this role implies, only a wealthy man looking for profit despite the expense. The gas mask is a cruel reminder that he is knowingly killing with DDT, deceiving the public while ensuring his own safety. The boy embodies generations to come, evoking sympathy from those who wish to keep the planet healthy for the sake of the children and grandchildren who will inherit it. Life springs from the boy: a tree sprouts from his back, flowers bloom in his hand, a bird tweets on his head, and a fish jumps from the stream flowing along his hips. This is meant to emphasize that the entire ecosystem will be affected as soon as we introduce chemicals into it. These synthetic substances will not lie dormant, they will transfer from the crops to the rivers, the insects, birds, animals, and inevitably to mankind. The man is directly injecting the boy with DDT, a challenge to people that this is essentially what we will be allowing to happen to our children if we accept the use of such toxic chemicals in our environment. Around the injection site the DDT spreads through the boys veins, appearing to be a system of black, polluted rivers on his arm. Leaves are already beginning to fall from the tree; the bird may not be joyously singing, but crying in pain and protest. The stream is already coursing with ribbons of black, the fish perhaps jumping from its beloved waters to escape; the flowers are uprooted from the soil, presented to the man by the boy as if to say ‘Look at the harm you are doing’. The color choice is simply meant to show the black and white rigidity of industrial power: you are either rich and important or poor and insignificant. The chemicals the man sells will suck the color from the world as they devastate nature. The boy’s healthy color is fading around the injection site, indicating that the bright pallor of skin will soon subside to white. The effect of the use of black through the printmaking processes is a reminder that in order to create art under this discipline, certain materials must be used. The same is true for the use of pesticides: but people must do everything in their power to prevent the most harmful chemicals from being distributed, and employ the safest methods of using them possible, despite cost or inconvenience.